If you haven’t heard by now, there’s a rising star in the social media universe and they may have the potential to make or break your social media marketing strategy.

Over the last 5 years, Instagram has fought its way to becoming one of the top social media apps in the world. In that time, we’ve watched Instagram go head-to-head again and again with competing apps like Snapchat and Facebook (before the merge).

Instagram continuously added features that would ultimately rival the popularity of its competitors. Through it all, Instagram and Facebook have proven to be relentless in their ability to tackle any and all rising competition.

Despite the long-standing social media platforms’ success in deterring new competition, there’s a new player on the field, and it’s got all the top social media apps shaking in their boots: TikTok

The New Kid In Town

TikTok is currently the world’s third most popular social media app. TikTok is well known for its short form, video sharing abilities. This key feature of TikTok is the one that other social platforms hadn’t gotten the jump on.

According to Finances Online, user time spent on TikTok has grown by 375% year over year since its launch in 2015 and shows no signs of slowing down.

Meanwhile, the top two most used apps globally, (Facebook at #1 and Instagram at #2) have consistently seen a decline in the daily average time spent on their platforms over the last two years.

What Has Brought TikTok Their Success?

The short answer: Their primary content is short-form video. With much of the platform’s content being under 15 seconds, it’s no coincidence that the two apps struggling to retain user time are apps whose primary content form is static imagery (i.e. Photography, Graphic Designs, Memes, etc.).

In order to compete with user attention, almost all social media apps have made serious changes to their application’s algorithm features. Social platforms are now prioritizing video content. We’ve seen the introduction of features like Instagram Reels and Youtube Shorts that function similarly to TikTok’s 15-second videos.

Instagram CEO, Adam Mosseri, revealed some useful insight into the changes made to their algorithm. They’ve urged their app's users who are looking to expand their reach to use the Instagram Reels feature and essentially upload more video content to their accounts than static imagery.

This has been a tough pill to swallow for many users who’ve become accustomed to uploading static imagery as their benchmark form of content.

The Promise of Greater Reach

Though things may look grim from a distance, there is a bright side to this massive change. If you are open and willing to adjust your perspective and try out new forms of content then there’s some hope.

The truth is this: all social media apps rely on user-generated content and user attention in order to truly thrive. With many social media algorithms prioritizing short-form video content, users are sitting on a goldmine of opportunity for organic reach.

Under new algorithms, creators will essentially have the opportunity to be exposed to new social media users without the use of paid marketing assistance.

For a while, organic reach had become somewhat of a myth to users on apps like Facebook and Instagram after introducing their new business features in 2016. Now that these algorithms are specifically targeting short-form video, playing the algorithm’s game could provide a serious opportunity for you or your D2C business. 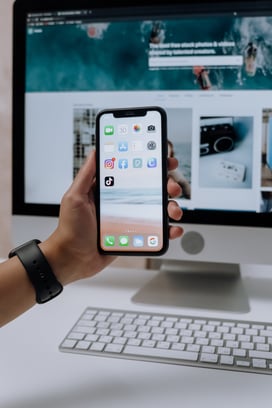 What Does This Mean For The Future

In short, pun intended, TikTok’s short-form videos are changing the way in which users prefer to consume social media content. We know this because, globally, social media users are spending significantly more time on TikTok than on any other leading platform.

While these aggressive strategies and platform changes may have you feeling as though the rug has been pulled from under you, these changes could very well be the magic carpet you have been looking for.

How You Should Move Forward

Don’t straight up abandon static imagery, as it still has its place in the realm of social media. Sometimes, a simple infographic is much more shareable and useful than even a 15-second explanation of a topic. Use the format that best suits your content, but switch it up from time to time.

There are always going to be users who prefer images to video and vice versa, so be sure to provide content in a way that appeals to all of your audiences.

Push yourself to adapt to what’s new. TikTok might not be where your audience is, but there are so many more platforms for you to tap into. Reels and Shorts are just the starting point, Podcasts, blog posts, and lives should also be explored if you’re looking to grow.

Find where your audience lives, and create content that best appeals to them, and never be afraid to try something new.